Hop into the sandals of a gladiator and fight for glory in epic arena battles! Now with cross-platform realtime online multiplayer 1vs1 battles!

Best place to follow along with the development is on my personal YouTube gamedev channel, but feel free to check out the below links as well.

I played this like 2 years ago with a friend, got nostalgia :D

It is maded by same dude

i FINALLY managed to beat Gladihoppers

my character was Max, a gaul with red long hair and woad paint on his chest and arms

and around 413 max Health

and Max was a Maceman

i have accepted and chosen the Emperor's offer

a farm in somewhere in the provnices

as a statue has been erected in the Ludus

to remember everyone of his Red hair

Gallic pecs with woad paint, and his body odor and foul language

the age of the Franks and Normans, Lombards and Alamanni, Anglo-Saxons and Welsh, Picts and Gaels, Vikings and Slavs (danes and nords, the swedes went east to Kievan Rus), Sassanids and Byzantine Romans

the high middle ages could also be interesting

the pole hammer and brigandine (studded leather armor but without leather)

loved Gladihoppers, felt the rage of the "cheating" AI (they always seemed to trash me no matter how good i am or what gear i use) , but became satisfied when i finally beaten it.

Now, time for second ending (by not accepting emperors offer)

I need the version for 32 bits [Please!]

it’s fucking awesome game. Have played on my iPhone for days. Great!

I have been playing this game for at least 3 hours, 7 hours at most. The Spearman and Paladin class are way OP and I love it This game is great.

Amazing game, but I wish there was local multiplayer.

I love this game. I played it a while ago and it has evolved substantially. I love the multiplayer option and how there are servers for many different places.

Man, that multiplayer is really interesting. From best game you made the ultimate game.

Reply
DOCTOR The 1st326 days ago

help i have a 60% keyboard without the arrow keys WHAT AM I GOING TO DO!?

I played the campaign, and i'm looking forward to test it with a friend :)

um will you be updating the game any time soon?

They updated it recently

mine won't download on Mac even with the enable

Good morning dreamon studios! can you tell please how defend emperor in arcade mode? Therese an achievement on android but its impossible, enemies are too strong, with my full character with top equipment and 126 attack and 222 def im getting only 19 wave, is it real? can you try please and fix it if its wrong, than you for your attention!

After the 17 wave enemies just rush you, they dont block your attacks or smth, they just attaking and pushing you, and each their hit gets 70-100 damage :((

If you are in the same stance as the attack from the enemy then you take less damage. If you hit their weapon whilst they are attacking then you block their attack.

Happy to be of help.

Your character is made a bit weaker in arcade mode so try and use one of the other characters by clicking on the characters picture.

Happy to be of help.

Wow! This game looks lovely! I like it so much!

May you add a new secret name? "God" and you'll know what it would do.

I can't seem to find the pinned comment in discord for the special names. Can anyone help me?

thank you for making this great game!

Thank you for playing it! :)

Hello, when are you updating the pc version of the game, its awesome i already have done both of the endings

just wonering what game engine did you use to make this?

This game is so fun...only issue i had was beating the campaign 3 times to try different weapons on arcade mode. Stealing equipment is OP but maybe that makes it more fun.

Thanks! Haha, yeah I agree the Career mode gets easy after a certain point, but a lot of people think it's too difficult so I'm not sure what to do about it. xD

interesting. I was wondering about that looking at your update notes. Oh well lol. Btw I thuroughly enjoy your vlogs.

Been playing this allot on Android. What's up with the spear though? Seems like complete trash? I stole it from someone then got wrecked by the next guy with a decent weapon.

Yeah, it's not supposed to be in the Career mode yet, but due to a bug it is. I will update the game soon and fix.

no update for pc?

Can you tell me all the special names please

There's a pinned message in the Discord server!

One of the best games I've played on mobile. I've reach the Champion level just yesterday, and I must say I've hooked on this game for more than two weeks. Man, keep your work! Someday this game will be even more exciting and fun to play. And if I must say something that I think will be cool... well... I think some boss fights or something like that. But by the way, really nice game you got there.

Thank you so much, Pudim! And yeah, definitely bosses would improve the game. I'm working on more weapon types right now, but in the future I'll add bosses too! :)

Can you tell me all the special names please

where is your discord?

I can't find it, please help.

There are more in a pinned commeent on our Discord! :)

Hands down best game, Fuck the people who write mean comments in your google play store edition cause they dump. Anyways have a good day Dreamon Studios :D

Haha, yeah the game took a huge hit in the rating because of a bug that made 25% of players crash. It's fixed now though so the rating should rise again! Thanks man! :D

I love this game. Great work!

what are the controlsS 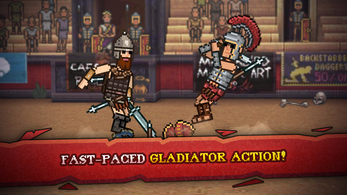